Farming in Canada, snow is something I’ve just learned to accept. I actually look forward to it. It slows down the pace and puts gets me int a more relaxed and reflective mindset. According to experts, snow adds nutrients to the soil. Maybe that’s why it’s called the poor man’s mulch. It certainly is working for me now. I did not have to time to put straw on the garlic plantings, so the snow cover is making it more likely our garlic will survive the winter.

As the soil gets recharged, so do I. Even though I’m not growing, I still go to market, relying mainly on storage crops like beets, carrots, garlic, onions and potatoes and squash to keep the cash flowing. Winter presents opportunities for non-produce items. A simple example is are bird feeder cones. These are foraged pine cones, which cost nothing. They are lathered in a concoction of lard, peanut butter, molasses, millet, bird seed, sunflower meal, and sunflower seed. We display at market on a separate stand. They weigh on average about 1.3 lbs.and sell for $5. A lot of people buy just one cone, but I’ve had customers buy 8. They more than cover the cost of gas and a farm stand from just one day of sales. 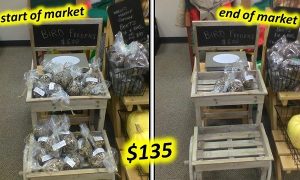 Winter markets also provide new learning experiences. I have been selling out of spaghetti squash, and I just bring our larger-size squash to market now. I always assumed the smaller ones were more marketable, but now I have many customers buying the larger ones, around 7 – 10 lbs. in size. I charge $1.50/lb. This is cheaper than the local supermarkets. I tell people this, and also that I round off in their favor. So I am selling spaghetti squash for $10, and expect to sell out of it over the next several weeks. 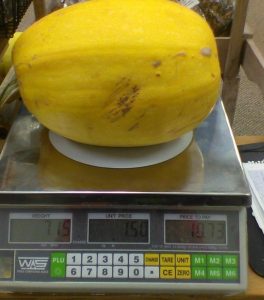 What can my customers do with it? I’ve got an answer thanks to having the time to catch up on cooking shows, and experiment with new dishes myself. You really need to take time to cook with your own produce so you can talk with your customers on how to use and enjoy it. Here’s my favorite squash recipe which makes it sound like anyone can do it:
1.cut squash in half and scoop out seeds
2. put in roasting pan with some water added for moisture and roast in a 400-degree oven for 45 minutes or until fork tender
3. when done, remove from oven and use a fork to make “spaghetti noodles” out of the squash
4. add a little olive oil, parmesan cheese, and sprinkle of salt and fresh herbs, or red sauce

With all this great new food to try I need to stay in shape. Once the growing season starts I don’t have to think about it, but in the meantime, doing push ups outside is an easy workout. Yoga and light weights round out my exercise routine to keep me in shape for the growing season ahead. 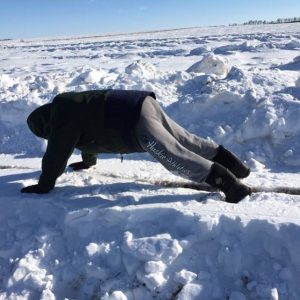 As a SPIN farmer I’ve learned it’s easier to work with nature rather than against it. Winter is no exception. Even though I’m not growing crops, I’m growing in other ways.

FIND OUT HOW OTHER BACKYARD FARMERS MAKE THE MOST OF WINTER – WITH OR WITHOUT SEASON EXTENSION – WITH A BACKYARD RICHES MEMBERSHIP HERE.

Grow Your Way To $100K
This comprehensive program gives you everything you need to build a solid business and make 5 figures in your first year.
LEARN MORE